One of the most important aspects of “taking a knee” is both the high profile visibility of a national stage, and the disagreement about “what’s appropriate where.” 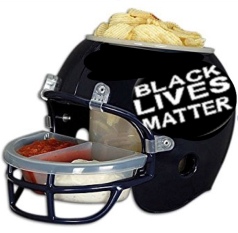 The argument that ensues on this subject takes place between people in a manner that reveals their values and their awareness. Values have a tendency to change based on awareness. Before abused children began coming forward as adults- there was very little awareness about child exploitation and sexual abuse. People kept it secret – refused to look at it – found it uncomfortable and kept it hidden. Today, because of expanded awareness – most children know they have rights and possess necessary tools to defend and prevent. Parents seldom any longer say “it’s a private matter” and sacrifice the victim to social vanity as many once did.

Racism in America may seem like a long stretch for comparison, but really it is very similar – and this analogy has nothing to do with Black people, but everything to do with white objectors. The difference is-  it is white people who are the secret keepers – the shooshers – the crime enablers who find this uncomfortable to face and discuss. It is white people who believe that their “game night” should not be interfered with while many of the people providing their entertainment have family and community, even children murdered in the streets. If a protest takes place that does not keep the silence at the cost of the crime against others – they are miffed. It is because they either do not comprehend (awareness is shallow to the realities suffered daily by people of color – exacerbated by white silence) or their values are such that white comfort is more important than Black lives. (Refer to Black Lives Matters and seek a correlation with their message).

The tragic irony is; It is the very fact that white people have the option to view this as a non-priority to their lives that necessitates continuing, strenuous, repeated high visibility. The reality is, white people should have the decency and the moral accountability to be ahead of this violation against humanity. But because of racism, privilege and implicit bias they do not grasp the magnitude that is lived and endured daily by people of color. The fact that a white person can permit atrocity without even investigating the stories they reject at presentation is the reason Black people die – and are forced to do all the heavy lifting for equal justice. The offense of “Take A Knee” is in direct proportion to the degree of white apathy in the heart of the offended.

2 thoughts on “Taking A Knee – What The Argument Alone Reveals.”